Cliff Cort is on to the world wide trend of modular building, with his very own twist. He notes that while the US market is sluggish on modular, buyers in other countries have wholeheartedly embraced the construction system. “There is less disruption to the site. It is quick. All over the world, people are wanting modular.” His twist to focus on “highly designed” and sustainable modular may be the game changer the US is waiting for.  As Cliff says, “Green is old news now.  The building code is making green the law as of late.”

Being an effective entrepreneur is about staying on the market edge. Cliff built Triumph Modular Buildings, and is now creating a piece of the company that is on that edge, by going highly designed green. Realizing the modular industry was made up of structures that had not changed in 30 years, Cliff decided time was ripe for change. “I knew everything was barely legal. Yes, all modular classrooms are built to code, but nothing more. They were the cheapest possible things – windowless classrooms. It was disgusting. I knew there was an unbelievable opportunity to raise the bar. The school systems have been getting what they asked for which is the least expensive alternative.”

The Importance of a Champion

In 2006 an architect from Germany, then working in Maryland’s Montgomery County school department, started a design competition in the United States. Familiar with modular construction in Europe, she knew America was lacking and needed to put together better buildings.

Cliff and his associates entered and won the competition for a green and energy efficient modular classroom design. They flew down to Washington, D.C. for the award. At that point, it was just a design. Cliff wanted it to be a reality. “My daughter was going to the Carroll School, so I asked: ‘How would you like to be the first one in the country to have a green modular classroom?’

“Steve Wilkins was the head of school and there was no precedent for what we were proposing. No one in the country had seen any green relocatable classrooms. It opened the eyes of all the dealers and manufacturers in the country.”

It IS Possible to Push an Industry

“There is this green movement coming. Sitting in front of a bunch of mobile modular industry folks, I was pushing them. The market did not push them.

“I knew I was in trouble with them because they were looking to maintain the status quo and maintain their existing assets. They were very protective of their legacy mobile buildings and classrooms,” Cliff explained.

Cliff then created a green modular building that Harvard University used as a child care center for 18 months as they renovated another structure. “It won all these green awards including recognition from the Massachusetts Chapter of the US Green Building Council.  One judge said he voted for it because it sat softly on the earth.”

The trend continues. “We are looking into new prototype modular classrooms now.  For example, the Sprout Space classroom below is designed by one of the largest architecture firms in the world, Perkins+Will.  We hope to be able to deliver it nationally for a compelling price.  The financial result of our green projects have yet to pay back any big results, although word of mouth works and we have been invited to work on interesting projects lately.” 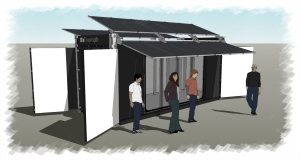 Expanding with Ideas and Energy

“People in schools are now starting to ask for green. Finally they are asking for green modular classrooms, addressing what we have been working on for years. It truly is transforming the industry. We have built the best temporary classrooms in the country two years in a row now. They are green, sustainable and relocatable.”

Cliff is abundant with ideas, some of them really radical in the opinion of the current industry. “I am trying to be relevant to the movement.”

“You need to take risks to innovate.  I offered a group of people in my office to take the test to become LEED accredited and proficient.  I said anyone who got it by January 1, I would give a $10,000 bonus to.  Sure enough, the one who passed the test left the company a short time after.”

Cliff is fast paced, continually thinking, continually revising, pushing his company into the future. He is, in fact, challenging the entire industry.

1 thought on “Pushing an Industry into Sustainability . . . from an interview with  Cliff Cort, President , Triumph Modular Buildings”